By Bob Patterson-Sumwalt / In Uncategorized / September 16, 2014

Ritika Pandey, one of our WSCF players, is heading to the World Youth Chess Championship in Durban, South Africa. She has agreed to share her journey and experiences here with WSCF. Follow her for the next two weeks as she participate in this exciting youth chess event! Below is her first post:

Hello, my name is Ritika Pandey. I am 12 years old, and I am in seventh grade. I go to the University School of Milwaukee. I am playing for the United States in the World Youth Chess Championship in Durban, South Africa.

I started playing chess at my school when when I was six years old. A year after I learned how to move the pieces, Mr. Matthew Schladweiler of IAC, my chess instructor at the time, encouraged me to start playing in chess tournaments. He has played an important role in encouraging kids in our area to play chess. My school chess coach, Mr. Fred Lange, motivated me to play in the Wisconsin State Scholastic Chess Tournament, Wisconsin Junior Open, and Supernationals 2013. He takes our school team to these events. It is a lot of fun to play as a team.

A year after I started playing in chess tournaments, I started working with GM Mesgen Amanov. He inspired me to truly love chess, and under his guidance I slowly grew. I am what I am because of my awesome coach. I like his unique style of teaching, he always throws in a little story to make that idea memorable. Because of him my rating increased and I became one of the top girls in my age group, so I got invited the World Youth Chess Championship. After I got invited, I also started working with GM Dmitry Gurevich. His game analysis has really helped me out. I am very thankful to work with two elite coaches. 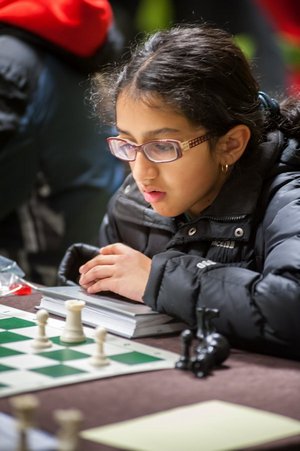 I also love tae kwon do. Master Kris is an important figure in my life. As I sparred in tae kwon do, I gained confidence, but not only in martial arts. Tae kwon do helped me gain confidence in chess. Master Kris tells us to respect one another, and the people you spar. In chess, you have to respect your opponent just the same. When you spar, he said you should have the eyes of an eagle, clear and calculating. You should pounce like a tiger, just don’t laugh like a hyena!! Another hobby of mine is reading, I devour books with greedy desire. I can read for hours and hours. I mainly enjoy dystopian novels. I also play violin. After all, music is the language of the soul.

My sister, Divya, works with me on chess. We study together, and she has always supported me. My mom, Mrs. Upasna Pandey, always drives me to tournaments. My father, Mr. Krishna Pandey, is a doctor and always encourages me. I am very lucky to have my parents’ support. I am looking forward to playing in Durban, South Africa. This is my first international tournament, go team USA!