WSCF will post each week in this article the top kids in the WSCF Chess Club. The WSCF Chess Club is composed of over 30 groups (clubs) across Wisconsin with a total membership of over 1300 players. We will post weekly or, in some cases, daily 4 “top” lists. They include the composite top 200, fast chess top 50, lesson level top 50, and puzzles top 50. The composite score totals the scores of fast chess rating, puzzle rating, lesson level, and the number of workouts.

Click on the links below to see the lists 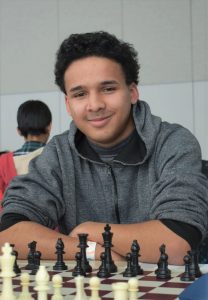 Benjamin Thompson is headed off to Lindenwood University this fall with a $12,000 scholarship from the school. Ben has been playing in WSCF tournaments for at least the last 12 years.

Discovery World. Check. Golda Meir Tournament. Check. Northeastern Wisconsin Tournament. Check. Or should we say “Checkmate!” Those are just a few of the chess tournaments Benjamin Thompson has either placed first or second at over the many years he has devoted to learning and mastering the game since he began playing in 2007! Benjamin first picked up a chess piece while visiting the Chicago Children’s Museum with his mother. Mother and son boarded an Amtrak train to visit Chicago for a day and the rest, as they say, is history. His mother vividly remembers walking into a room at the museum that was designed as a life-size chessboard. It was there, under the guidance of two high schoolers that young Benjamin began to become inquisitive about chess. These two complete strangers spent hours with Ben introducing him to the pieces and the rules of the game.

When Benjamin entered second grade at Golda Meir School, he was assigned to Mark Holland’s classroom. Unbeknownst to the Thompson family at the time, Mr. Holland was an avid chess player and served as the coach of the Golda Meir chess team. Students could stay in at recess and play chess for fun; or they could commit to staying after school two nights a week to join the Golda chess team. Benjamin chose to do both as he started to learn chess and commit to becoming a student of the game. At the time, as they still do today, Golda Meir competed in weekend tournaments in and around the greater Milwaukee area sponsored by the Wisconsin Scholastic Chess Federation, under the direction of Bob Patterson-Sumwalt. Soon Benjamin found himself immersed in all day weekend tournaments and loving the concentration, competition and camaraderie chess provided. Craig and Lynn Krueger, Golda Meir parents, were instrumental in Benjamin’s formative chess years as they spent countless hours organizing the team and giving up their weekends to be with the team.   Benjamin would often times find himself on board one, however that didn’t just happen overnight. From the time he first sat down to play chess to preparing for his final competitions in the Milwaukee City and Wisconsin State championships this spring, Benjamin has always found time to share his love for chess with others as evidenced by his:

Now a senior and captain of the Rufus King International High School chess team, Benjamin’s passion for the sport has reached an all-time high as he prepares for the next level. With a WSCF rating of 1425 and a USCF rating of 1301, Benjamin will head off to college in August of 2019 to attend Lindenwood University in St. Charles, Missouri where he will join their chess team after having obtained a chess scholarship totaling more than $12,000. The Lindenwood Lions will not only be adding an excellent chess player to their team, but someone who has used chess to become a well-rounded individual. In addition to chess, Benjamin serves as a Link Crew leader at Rufus King, runs his own lawn care/snow removal business and has participated on the track, soccer and comedy improvisation teams at Rufus King High School.

Check out this video and see what some of our constituents say about WSCF    https://vimeo.com/303816882

On November 1st WSCF will hold a fundraising event at the Tripoli Shrine Center.   As well as a fundraiser WSCF will be honoring past Presidents and Board members and giving awards to individuals and clubs.

Don’t miss some amazing silent and live auction items! All proceeds from this event will benefit WSCF and the kids who participate in our chess programs.

There will also be a cake contest.   Each club is encouraged to submit a 3 layer or more cake for silent auction. The club whose cake receives the highest bid will be awarded $100 (with at least 10 entries) or 10 chess sets.

You will have a choice of 3 entries: bacon wrapped meatloaf, chicken marsala or vegetarian.

If you’re purchasing a table or would like to discuss sponsorship or donor opportunities, please email wscfbanquet@gmail.com.

If you would like to contribute with silent and live auction item, please email wscfbanquet@gmail.com as well.

WSCF is embarking on a new program to develop chess clubs on the near north and south sides of Milwaukee. We are currently working with Boys & Girls Clubs, Police Officers, and firefighters to start this program.

The intent is to find leaders who want to mentor youth. We have found over the years that the best way to grow chess in a city is to form new clubs. We have seen this happen in Sheboygan and Green Bay. When a school has a club and hosts a tournament, other schools follow.

It is helpful for these leaders to play chess but not required. Many leaders learn along with the students. Many clubs around the state are led by parents and teachers who don’t know how to play.
I have many teachers call me and ask for help in starting a club. They often don’t have money for a club. Hence, this program would be helpful to them as well.

WSCF will provide:
• Chess Sets
• Demonstration Board
• Chesskid.com memberships for each student (up to 25 students)
• Medals and Trophies 3 times per year for in club tournaments
• Discounted entry fees for local WSCF tournaments
• Club leader training
• A $500 stipend for the leader at the end of the first year.

Many of the 80 clubs we work with across the state have in -club tournament at the end of the season. WSCF helped with 3 club tournaments and 3 camp tournaments in June.    Most have a 4 or 5 round swiss style tournament and WSCF provides the trophies and medals. WSCF also supplied the WinTD software to run the tournaments. 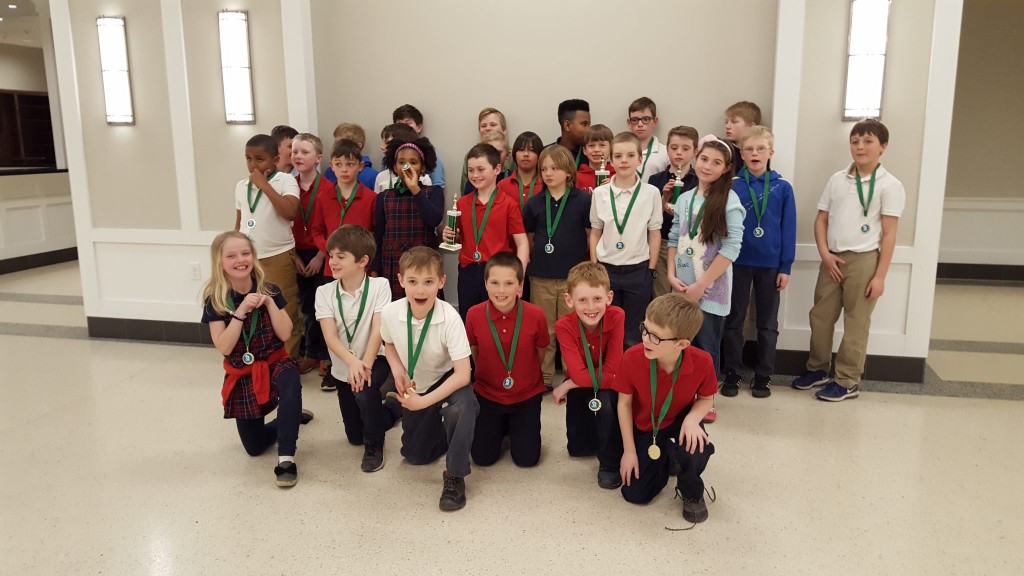 USCF and New Yorker Magazine have published a video that was filmed at this tournament this past April.  Link below.

Five girls from Wisconsin attended the National All Girls Championships on April 21 and 22 in Chicago.  487 players participated in this two day event.

Those participating were Anapuma Rajendra, Simran Bhatia, Gauri Menon, Radhika Gupta and Jind Kaur.   If we have missed anyone please let us know.

This tournament is featured in a video from the New Yorker Magazine.   In this video you will see players talk about the tournament and value of chess in their live.

This is my favorite time of the year. As the chess season wraps up, I get to pass out trophies and see the joy and pride on hundreds of faces. At every WSCF tournament a player will receive a trophy, or a medal and each person is called up in front of one to two hundred people.

For some winners this may be one of many awards that they receive in their youth activities. For many this is their only activity in which they win an award. We like to think we are passing out a dose of self-esteem. You can tell by their faces what it means to them. You can see it in how they carry themselves a little higher and with a little more purpose.

Playing chess improves math and reading scores, teaches patience, critical thinking, and being a good sport to name a few of the benefits. But it is that moment of joy that means the most to each player and to me. Since WSCF’s start over 14 years ago we have awarded with our local tournament hosts 9,000 -10,000 trophies. That is a lot of self-esteem!

You can help us hand out even more in the next 14 years. There are about 900,000 students in Wisconsin currently and approximately 5,000 to 10,000 students who play chess competitively. If ten thousand, then chess is played by less than 1.2 % of Wisconsin K-12 students. We have a lot of room to grow!

Your donation of _____ would do the following:

Regardless of your support you will know that you are helping to bring joy to more students across Wisconsin.

In 2008, WSCF began awarding scholarships to winners of some of our chess tournaments.   The scholarships are given when 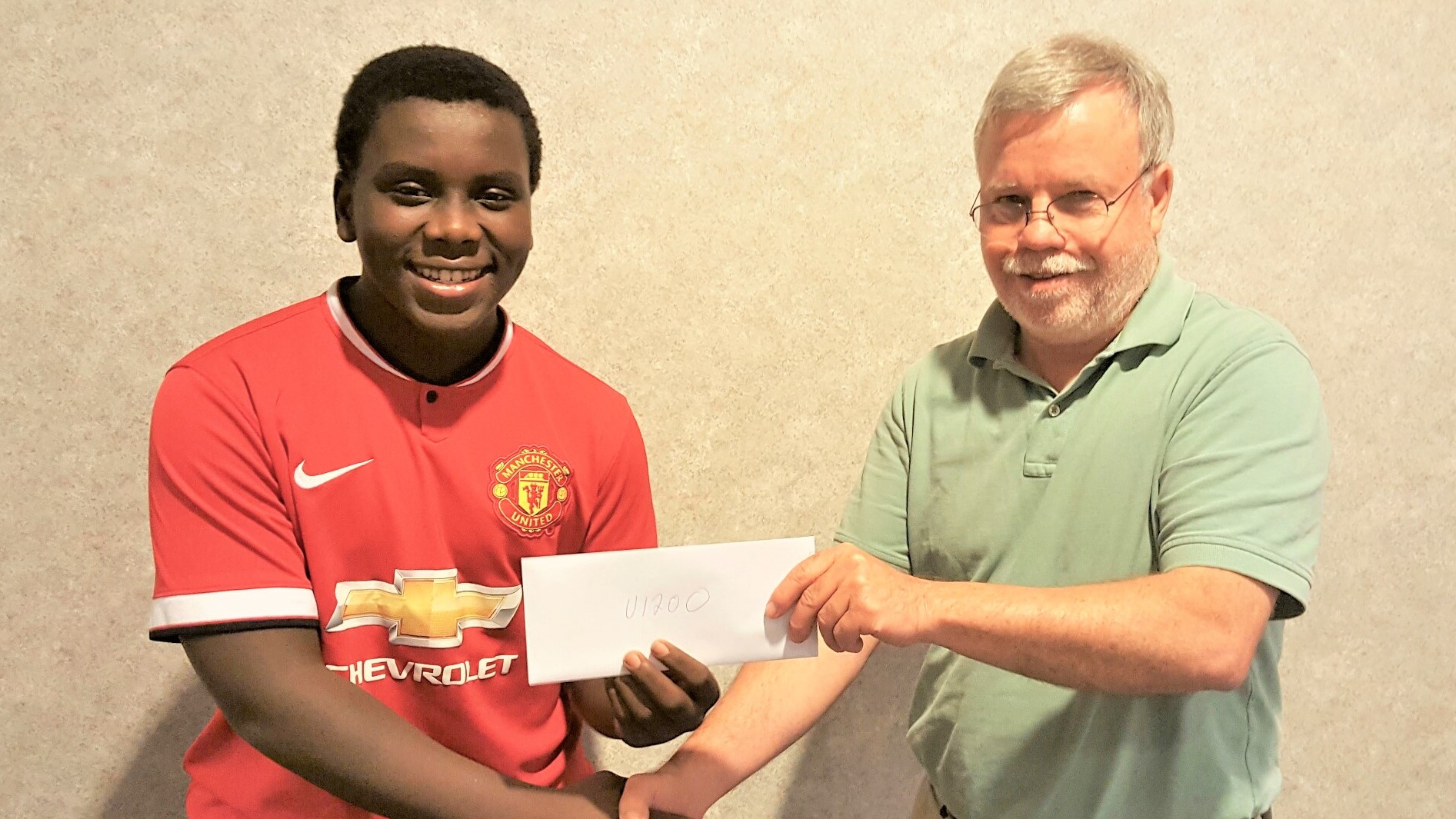 the student graduates from high school and enrolls in a postsecondary institution.   The funds are sent to the college and deposited into the student’s account.

To support our scholarship fund reserves and to offer new scholarships, WSCF is beginning a series of monthly tournaments.   These tournaments will be USCF rated G45, d5, 4 Round Swiss and will award up to $600 at each tournament depending upon number of entries.   If the required number of entries is not attained, then 80 % of the revenue will go to the first-place winner in each division.  Each tournament will have an Open section for the higher rated players as well as sections for the lower rated players.

Donations to help with past and future scholarships are welcome.   If you want to donate to one of our special tournaments (All Girls, Grade levels, Wisconsin Dells) please send us an email to wscf@wisconsinscholasticchess.org and send the funds via a check to our office or via the donate link.

This year’s series of tournaments begins on June 17.  For complete details please go to the upcoming events page of our website.

The days of May 11 – 14 found nearly 5800 chess players at the United States Chess Federations Super Nationals VI.     Every 4 years the USCF  combines their Elementary, Jr. High and High School National Tournaments into one.  This year all convened at Gaylord’s Opryland in Nashville Tennessee.    5,578 players from 49 states competed in 31 divisions in seven rounds.   After Sunday May 14th over 1325 trophies will have been awarded. 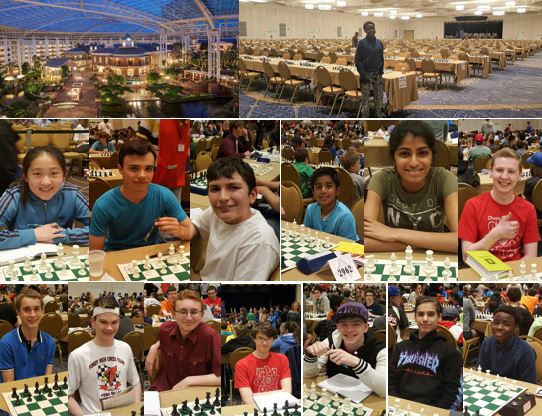 Support us on Amazon Smile